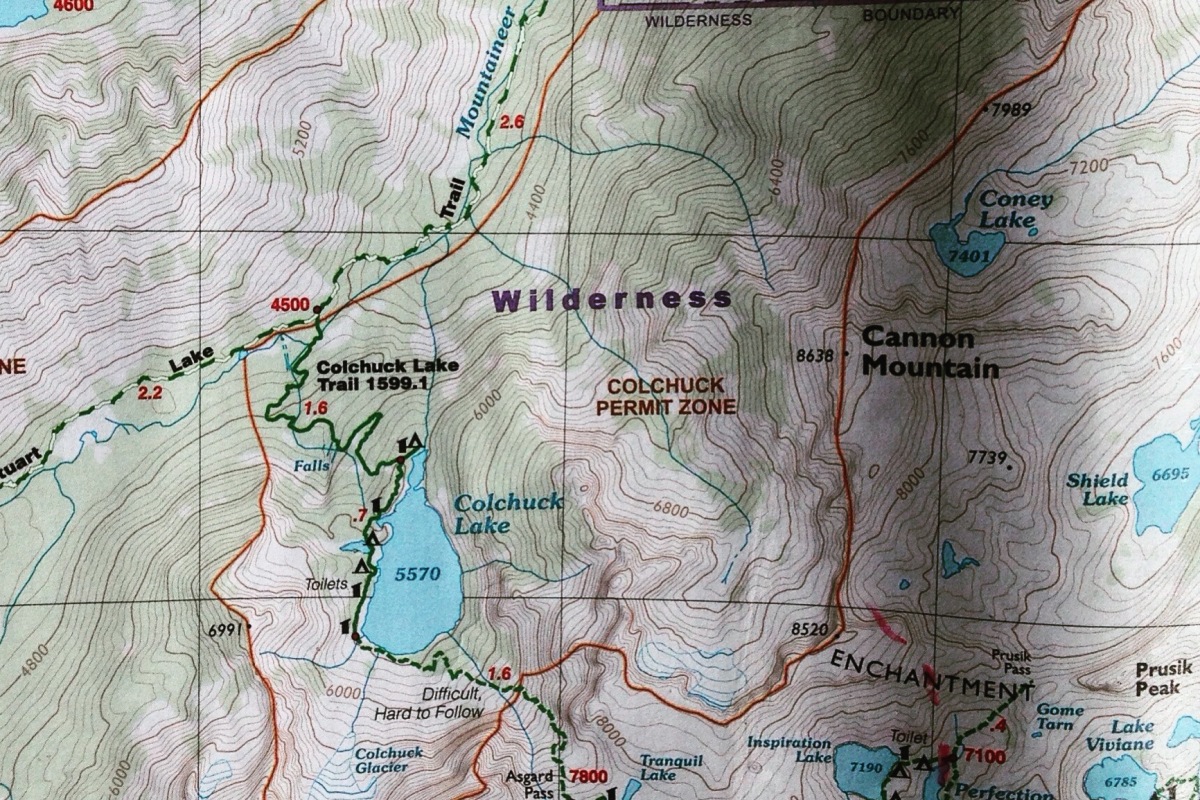 Jared and I hiked to Colchuck Lake on a Sunday. Day hike, no overnights. Colchuck is the beginning, or end, of the Enchantments (depending on how you look at it), a super popular route in Washington. The lake was stunning!

We leave Seattle super early. We had originally planned to stay over night, but instead opted to get a good nights’ rest and get on the road around sunrise. We get on the trail around 8 am. Start hiking in the cool shade of the forested trail.

After 1 1/2 miles we cross a bridge and started climbing a bit more. 3/4 of a mile later, we veer left and take the trail to Colchuck instead of going right to Stewart Lake (also supposed to be a beautiful lake…another day!).

Some switchbacks and more vertical gains. The longer we hike, the more people we see – people who had camped either at Colchuck or another lake and were making their way out this morning. At one point – not entirely sure how close we were – a guy tells us “almost there!”. Nice!

Then, bam! Colchuck! Pristine blue beautiful waters under Dragontail Peak. So ridiculous! Sunny and clear day. We stop to eat our lunch of cucumber and beechers cheddar sandwiches. Drink nuun. Jared somehow gets cheese on his neck during the eating experience – elevating his normal food-all-over-the-face routine to the next level.

We continue on, our sights set on the opposite end of Colchuck (or maybe up Aasgard Pass? who knows just how far we can get  before 1 pm…). Aasgard is a steep ascent (2000+ feet in about a mile or less) and the gateway to the core Enchantment Lakes.

We pass a few tents. I know Belle, my REI coworker is camped out here with her girlfriend Jule somewhere. And there they are! They had set up just off the trail, having hiked in late last night. We chat and look at the map for a few minutes. I put on sunscreen. They’re shooting for the top of Aasgard. Maybe we will?

We push on and make our way around the lake and across the boulder field to the tiny sandy shore just below Aasgard. We have about an hour before we planned to turn around. Let’s just enjoy the lake and the sun!

Jared and I both take dips in the cool water. It’s somehow not as cold as I was expecting. I don my wind layer (Patagonia houdini jacket) which soaks up the sun and heats up instantly, which makes the cool waters of Colchuck all the more refreshing.

At 1 we pack up and retrace our steps – back around the lake and down the Colchuck then Stewart Lake trails. The day is warm by then and more hikers are out and about. We wish we could stay a bit longer, but are happy we made the day trek. Definitely worth it. Maybe we’ll come back to hike the Enchantments before permit season opens May 15…

Drive back to Seattle…